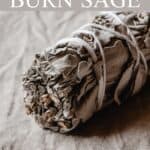 Our guide to burning sage will help understand both the science and the mysticism behind this practice. Learn how to burn sage, its benefits, and more!

Burning Sage: What is It? Should You Do It?

Sage has a very long history. People have used sage for both spiritual rites and traditional medicine for centuries. In fact, the practice is deeply embedded in Native American culture, as well as Egyptian and Greek cultures.

Sage, however, benefits more than just your spirit.

Let's dive into the details about sage, the benefits of burning sage, and how you can do it at home.

However, if you want to cleanse your home, you’ll need something different—white sage. White sage is also known as salvia apiana, and it is in the same genus as the culinary variety.

For hundreds of years, Native Americans have turned to the sacred herb white sage to purify their surroundings and banish any negative energy. Besides being crucial for spiritual purposes, sage smoke can also help get rid of insects and keep physical bodies healthy in a few different ways, with scientific research backing it up!

What Are The Benefits Of Burning Sage?

The practice of burning sage is commonly known as "smudging." The primary use of sage has been to clean up the spirit and atmosphere, but it has now been shown to provide more benefits. Some of these include:

Although scientific research has yet to provide evidence, it is believed that burning sage releases negative ions that neutralize the positive ions present in the environment.

Common sources of positive ions include mold, dust, and other particles, which can cause allergies. If this theory holds true, regular burning of sage could relieve allergy symptoms and improve air quality.

Sage is known for its antimicrobial properties, which make it an effective tool for neutralizing airborne pathogens such as bacteria, fungi, and viruses.

The smoke from burning sage purifies the air and protects against pathogen-borne diseases, reducing the risk of infection.

Additionally, the smoke acts as a natural bug and insect repellent.

Yes, sage has compounds that can help improve your mood and mental health! Acetylcholine plays a role in improving behavior and cognitive tendencies like moods, memory, etc. The body secretes AChE, which breaks down this acetylcholine.

Sage has chemicals that can inhibit the working of this enzyme, which can improve your mood and brain power. And the fragrance doesn't hurt either!

Not only does sage help elevate your mood and remove negativity and stress, but it also promotes better sleep. By reducing insomnia and promoting relaxation, sage can help improve the quality of your sleep.

Sage also gives off a pleasant smell when it is burned, which can make your bedroom a more inviting place to sleep.

How To Burn Sage: How Do You Cleanse A Room With Sage?

Smudging is a sacred Native American ritual, so you should be careful not to offend anyone with how you do it. In fact, even the term "smudging" or "smudge stick" is considered offensive in some circles. Some people prefer to refer to sage bundles as "smoke wands".

Before you start, you’ll need the following:

What Is Sage Used For Spiritually?

Smudging can help you feel better by cleansing your aura and environment. It helps expel negativity, connect with the spiritual world, and have better intuition.

If you’re someone with a more scientific mind, there’s a more acceptable explanation for the spiritual stuff. Sage has some thujone, which may be psychoactive. Thus, sage can enhance creativity because it is a hallucinogen.

Shamans and other believers in the supernatural have long used sage in their rites and in sacred medicines. However, anyone can burn sage. The only thing to do is be respectful of the culture, so you don’t culturally appropriate anyone.

How Often Should You Smudge?

There’s no set number of times for the smudging ritual. Instead, you have to rely on your instincts. The general rule is to cleanse the area whenever you feel negative energy around you.

So if you start feeling depressed, aggressive, or heavy, it may be time to burn some sage.

Where To Buy Sage?

Since smudging is primarily a Native American practice, it may be best to buy sage from Native American businesses as a means of supporting indigenous culture. That way, you’ll be contributing to their income and paying your respects to the culture in a way that matters. Plus, you get to help the environment.

In conclusion, sage is a sacred herb that has been used for centuries by cultures such as Native Americans for its spiritual and health benefits. Though science is still working to understand the full extent of its benefits, it is known that burning sage can help purify the air, neutralize pathogens, and elevate mood.

Whether you choose to use it for spiritual rituals or simply for its health benefits, it is important to approach sage with respect and reverence.

So, go ahead and embrace the tradition of smudging to cleanse your home and let go of any negative energy, and enjoy the benefits it brings to your physical and spiritual well-being.