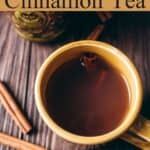 Cinnamon tea is very easy to make, yet tastes better than you would ever imagine for such a simple drink! This magical spice takes on a whole other flavor dimension when brewed as a delicious caffeine-free tea that just happens to have many health-fortifying benefits, too. I hope you enjoy it!

How Do You Make Cinnamon Tea?

Which Type of Cinnamon is Best?

This recipe works well with both cassia cinnamon and Ceylon cinnamon sticks. Cassia is the more common form of cinnamon, and is also sweeter and stronger in flavor, making it my first preference.

How Much Cinnamon Tea Can I Drink a Day?

This will depend on your particular needs. If you have concerns about preexisting conditions please consult a healthcare professional before consuming. Otherwise, I would not advise not drinking more than one cup a day, unless using as a specific natural remedy for something.

Can I Use Ground Cinnamon to Make Cinnamon Tea Instead?

Yes. If you do not have cinnamon sticks, you can replace them with 3 teaspoons of ground cinnamon powder instead.

Cinnamon tea isn't tea in the technical sense. Did you know that the only true tea is a tea made with the leaves from the Camellia sinensis plant? Cinnamon tea is technically what's called a tisane, aka an herbal infusion. 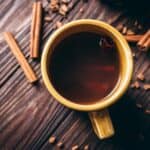