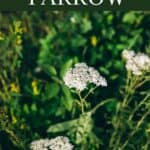 Yarrow (achillea millefolium) is known across the world for its medicinal properties and has a rich history in folklore. We’ll talk here about how to identify yarrow, foraging for yarrow, its uses and the mythology surrounding it.

Yarrow, also known as achillea, nosebleed, bloodwort, little feather and many other names, is a perennial in the Asteraceae family. It’s native to regions in the Northern Hemisphere in North America, Asia and Europe, but was spread across the world by traders who discovered the many yarrow benefits.

It’s recognizable by its small white and pink flowers and feather-like leaves. The flowers, leaves and roots of the yarrow are all used in traditional medicine.

Where Does Yarrow Grow?

Common yarrow grows naturally in the wild in areas of grassland and the open forest, usually in mildly disturbed soil.

If you want to grow yarrow yourself, planting it in areas where it receives full sun will encourage the growth of more flowers. Partial shade may result in uneven growth. Yarrow likes hot and dry conditions best, and it won’t do well in wet soil.

Folklore venerates yarrow for its protective qualities - a reputation that probably originates from its being such a good companion plant and helping the plants around it thrive.

In England, mothers would tie up bundles of yarrow near a child’s cot in order to ensure that the child grew up healthy. Yarrow was also believed to provide protection against changelings and witches.

In Greek mythology, the yarrow plant gave the mighty Achilles his invulnerability when he bathed in waters where it grew.

There is also a widely held belief that holding up the feathered leaves to the eyes, or rubbing them on the eyelids, would allow second sight and communication with spirits.

Yarrow is similar in appearance to poison hemlock, which is incredibly toxic, so it’s vital to be confident when working out how to identify yarrow. If you’re at all unsure, do not touch it! It’s also easy to confuse with Queen Anne’s lace. However, when identifying yarrow, there are a few defining features you can look out for:

When foraging for yarrow, it’s best to work in the springtime if you can when the plant has just begun to flower, as this is when it is the most potent. However, you can harvest the leaves all year round. All parts of the yarrow plant have medicinal purposes.

How to harvest yarrow:

There are a lot of yarrow benefits! It’s believed to have anti-inflammatory and anti-bacterial properties, which means that it’s helpful for healing. In addition, yarrow is a great helper to the digestive system, and it can be beneficial for healthy blood flow.

Make yarrow infused oil that you can use to treat skin irritation, cuts, bruises and blemishes.

Yarrow’s healing properties don’t just work on humans; it’s also an excellent companion plant. When planted next to something that is sick or dying, yarrow’s ability to balance the soil PH, deter pests and remove damaging minerals from the soil mean that it can often bring about a recovery.

Yarrow’s healing properties make it a valuable plant to forage. As you can see, you can use yarrow in many ways to promote good health and healing. It’s also an excellent plant to cultivate in your garden, as its healing properties will benefit everything else around it!

The Wonderful World of Mullein